END_OF_DOCUMENT_TOKEN_TO_BE_REPLACED

The yellow metal has surged so far in 2019 in part due to global economic concerns like the US-China trade war, record levels of negative-yielding debt globally and signs of manufacturing slowdowns in major economies – to name a few. Fear of uncertainty often drives investors to perceived safe haven assets, such as gold.

There are a number of ways to play the gold rally, including physical bullion, gold stocks and funds that invest in related securities. Is it too late to get in?

Not with gold mining stocks. As measured by the FTSE Gold Mines Index, gold miners are down 54% from their peak in 2011. Miners have been rising in 2019, but they would still have to jump a whopping 117% to reach their former record highs.

This could be attractive to some investors and I think there's strong upside potential.

Gold was up 20.1% year-to-date at end-August. Sound impressive? Miners were up more than double that at 42.9% over the same period.

Since miners' margins are highly leveraged to the price of the metal they produce, these companies have historically appreciated alongside gold.

Looking at some of the mid-sized gold stocks, all were up significantly in the last 12 months as of August 29, but of course past performance is no guarantee of future results.  Junior miners have also seen performance far greater than that of physical bullion.

If gold continues on this run, I believe gold stocks will too. However, not everyone is a gold bull. Vanguard, the world's largest fund company, has slowly moved away from the yellow metal.

In 2001 Vanguard removed the word "gold" from what was then the Gold and Precious Metals Fund. Then just last summer, Vanguard announced that the Precious Metals and Mining Fund would drop its exposure to metals and mining from 80% to just 25%.

Was this a good decision on Vanguard's part? We can't say for sure. But take a look at the chart below. When Vanguard changed the name of the fund, it coincided with the start of a decade-long precious metals bull run that saw gold rally from an average price of $271 an ounce in 2001 to an all-time high of more than $1900 in September 2011. That's more than a sevenfold increase. 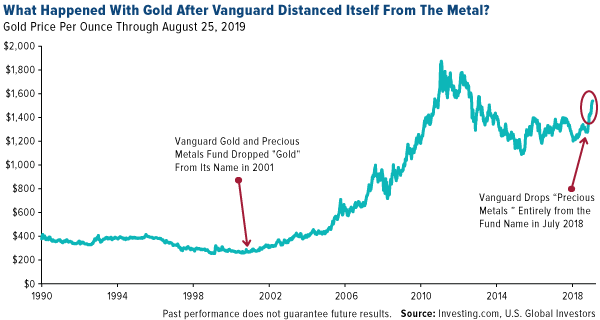 And what did gold do after Vanguard stepped away in July 2018?

At the time the yellow metal was trading below $1200 and many thought it had hit a bottom with another rally just around the corner. Turns out that was true as gold has since rallied to $1544 as of August 29.

At US Global Investors we've been gold believers since 1974 when we opened the USERX fund and even more so in 1985 when we created the UNWPX fund.