END_OF_DOCUMENT_TOKEN_TO_BE_REPLACED

3 million ounces seen needed for both...
ACCORDING to recent research from our team, it is just a matter of time until demand for platinum from fuel cell electric vehicles equals the current level of platinum automotive demand, says the World Platinum Investment Council.
That demand is forecast to be over 3,000 kilo-ounces this year [ie, 3 million Troy ounces, some 96.4 tonnes]. FCEV platinum demand could exceed 3,000 koz as early as 2033 under WPIC's 'commercially-enhanced' scenario, where effective government policies and initiatives spur on the growth of the FCEV market.
With such encouragement, production and infrastructure critical mass will result in economies of scale sufficient to promote widespread FCEV adoption on the grounds of costs and practicable usability. Under a more conservative policy-only based scenario, platinum FCEV demand would equal current automotive demand a little later, by 2039.
China – which has just seen the launch of its first mass-produced passenger FCEV, the Changan Shenlan SL03 – is well positioned to be one of the leading forces in the global FCEV market, especially in the mass transport and heavy-duty sectors.
This is perhaps not surprising, given that in 2019 China was home to approximately seven million heavy-duty trucks – or one third of the world's 20 million heavy-duty trucks. Based on Bloomberg NEF predictions, by 2040, 50% of the world's heavy-duty trucks will be powered by clean energy. 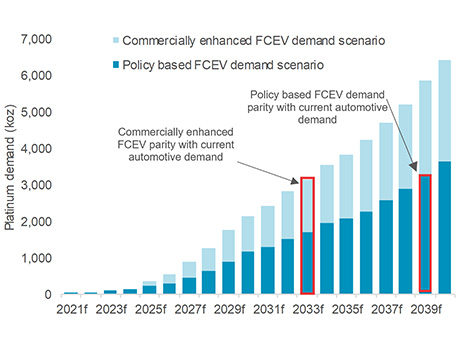 The International Energy Agency Advanced Fuel Cells Technology Collaboration Programme's statistics show that 5,648 FCEV buses were in deployment globally as at the end of 2020; China is at the forefront of this market, with a fleet of 5,290, giving it an almost 94% share.
The further expansion of the new energy vehicle (NEV) industry under China's 2060 carbon neutral directive is also highly supportive of FCEV growth. According to China Association of Automobile Manufacturers (CAAM) statistics, 8,922 FCEVs were registered in 2021.
Recent plans (NEV Industry Development Plan and NEV Technology Roadmap 2.0) will help to stimulate the market for FCEVs further. By 2035, the market share of NEVs in China is expected to exceed 50%, with the number of FCEVs reaching around one million.