END_OF_DOCUMENT_TOKEN_TO_BE_REPLACED

Is a mix of cash, Gold Bullion, stocks and bonds the way to go...?

"A few decades ago," we remarked, "a guy named Harry Browne devised an investment strategy he dubbed the 'Permanent Portfolio.' The idea was so simple it seemed almost moronic. And yet, with the passage of time we have discovered that his idea was pure genius.

"He suggested building an investment portfolio out of only four components: gold, bonds, stocks and cash. 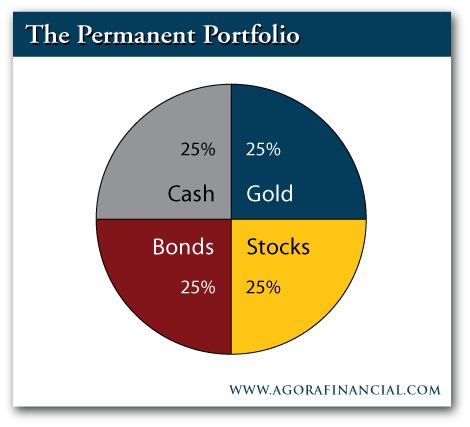 "The idea was that at any given time, two or three of these four components might underperform — but the other portfolio components would perform so strongly, you'd get an overall gain that would outpace any increase in the cost of living. Incredibly, this simple strategy has delivered some surprisingly strong investment results."

After providing more detail about the history and underlying philosophy of the Permanent Portfolio, we invited our Dear Readers to ask themselves the following questions:

We called this little exercise the Daily Reckoning Group Research Project and as usual, our Dear Readers responded with some fascinating suggestions.

Several readers struggled to comply with the rules of the Group Project. For example, some readers could not stop themselves from recommending specific companies; others argued that some of the very best Permanent Portfolio allocations do trade on a public exchange.

One such reader suggested buying grazing land as part of his Permanent Portfolio. Another recommended buying a house. And a third named potash as one of his allocations. We sympathize with these readers who "drew outside the lines." The financial markets do not possess a monopoly on attractive investment opportunities. We also sympathize with those readers who could no longer stomach the idea of buying Treasury bonds as a "risk free" allocation.

"Mr. Browne's formula was based on the idea of a functioning and fair government and not a criminal enterprise," writes a reader named Kent. "I would bet he would eliminate most government bonds since today they really are nothing more than counterfeit and would substitute ammunition, food or fuel."

A reader from Buenos Aires (not Joel) offers a similar observation. He points out that the Permanent Portfolio mutual fund (PRPFX) has held a large position in both US Treasuries and Swiss bonds. "[This allocation] has been great so far in this über bond bubble. But will it stand the test of time?... I looked at the permanent portfolio's performance in this century, which yields an increase of about 130%... However, looking at its performance from 1996 to 2002 is quite disappointing. Moving around like a cork on the water's surface, just bouncing around in the waves. It takes off in 2002, when Greenspan lit the fuse beneath the bond bubble. What will happen when the bond bubble ruptures?"

Not surprisingly, most of the folks who had no use for Treasuries had plenty of use for hard assets.

"Dear Harry (RIP). Things are different now while the Dollar is dying," writes a reader named Susan. "It's all 'risk on' as the world hangs in the balance... You must have your own grocery store at home... I want to be able to put my hands on at least a few of the things I need. All the clouds out there storing my stuff for me make me very nervous and I hope to end up with more than vapor and fumes at the end of the day."

"There might have been a time when the permanent portfolio idea may have worked," writes a reader named Ken, "but I believe that time has passed, which is why we avoid most bonds and Buy Gold and silver."

A reader named Carl concurs. "I do not believe in a 'permanent' portfolio," he writes, "because things work in cycles as you surely know... We are in our sixties and plan to stay conservative and just continue to Buy Silver bullion each month (Dollar cost average). We have had more than a few of our stocks go to zero but we know that gold and silver, especially today, will never even approach that point... Mundus vult decipi, ergo decipiatur. ('The world wants to be deceived, so let it be deceived')"

Hard assets were not the only crowd favorites, however. Many readers suggested investing in real estate investment trusts (REITs) and other types of high-dividend-paying stocks. Biotech stocks also seemed to be a favorite.