END_OF_DOCUMENT_TOKEN_TO_BE_REPLACED

Ignore those predicting a housing bust. Gold shows us it's already happening...

WHEN IS a Dollar not a Dollar? asks Charles Vollum of Casey Research.

When it's been tied up in housing for nine years.

On June 3, Standard and Poor's issued the latest update to its Case-Shiller Home Price series, writes

Then comes the key statement: "Nationally, home prices are back to their mid-2002 levels."

This means that on the average, a home in the US that was purchased for $200,000 in mid-2002 would have sold for about the same price two months ago. So after owning the home for almost nine years, you could sell it and break even – no capital gain nor loss, and all of the cash you originally invested would be returned to you.

But the Dollars returned are not the same Dollars that were invested!

The price distortions caused by a depreciating currency play havoc with investors' efforts to decide what price to pay for assets, as well as making it difficult to tell when to sell. After all, our goal isn't just to build an account with big numbers in it – we want to be able to afford a better life for ourselves and our families.

One approach to solving this problem is to price things using a more stable form of money – one that cannot be created and destroyed at the whim of a central bank. Gold.

And yet, both coffee and crude oil are several times more expensive in Dollars than they were nine years ago. The same goes for silver, food, copper, gasoline, postage, college tuition... almost anything you can think of.

Using gold as the standard of measure shows what is really happening with home values: 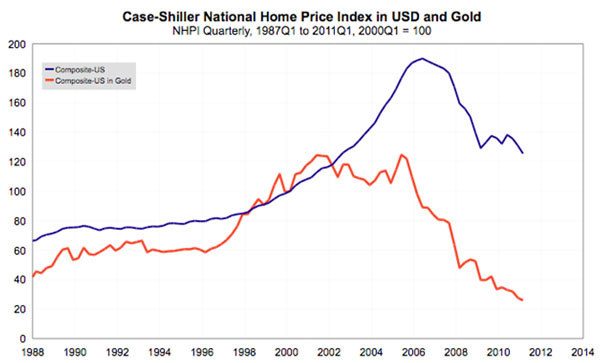 The blue line shows house prices in Dollars, the red shows them in terms of gold.

Home values haven't just rolled back to their 2002 levels – they have been making new all-time lows every quarter for the last year!

This chart by itself can't tell you whether it is time to buy a house, or if it is too late to sell that second home. Prices could keep falling, or they could stabilize and begin to recover; that will be determined by the supply of homes on the market, the needs of buyers, and the strength of their finances.

One thing is certain: in the aggregate, home values will never go to zero. People need to live somewhere, and real property has real value. But in the coming months, the Dollar price of housing may stabilize, and even rise if QE3 is launched or massive amounts of new fiat money are created to bail out Europe or to contain some other emerging crisis – even as real values are stagnant or falling. Take a look at 2001-2006 and 2009-2011 in the chart above for examples of this.

Yet the Home Price Index only goes back to 1987... Just how low are home prices compared to the decades before these records began?

But let's peer back even further, to the cyclical low of the last century – the Great Depression.

However, in the 1930s, the size of an average home was around 1,000 ft2, while today's average home is about 2,169 ft2. So homes now cost about 2 grams/ft2 – 35% less than the 1935 cost of 3.1 grams/ft2. This is even more amazing when one considers that today's homes include central heating and air conditioning, vastly improved insulation, and many other features and conveniences not found in a typical 1930s home.

So home prices today are not just the lowest in the last 25 years, they are actually lower than at the bottom of the Great Depression!

The Greater Depression isn't just a possible future that we might encounter – we are deep in it right now. The truth about our situation is being masked by the massive quantities of money being created by central banks around the world.

The key to surviving and thriving is to have your savings out of reach of the government currency manipulators by keeping it in gold, and to ensure that your investments are growing in gold value, not just showing illusory funny-money gains.