END_OF_DOCUMENT_TOKEN_TO_BE_REPLACED

Just how much money – and how much Gold – does the world hold today...?

THIS ESSAY compares the money supply of 25 selected economic areas and discusses the ratios between the values of official Gold reserves to outstanding currency, writes Mike Hewitt of Dollar Daze.

These 25 economic areas include 38 countries and make up 89.6% of the world's GDP and 65.1% of the world's population. The Bank of International Settlements (BIS) has a link on their website which lists all of the central banks for different countries.

The following charts use money supply data from these official websites. The link to the raw data is at each country's name.

Additionally, not every country publishes all four of the common monetary aggregates.

For instance, the Bank of England does not publish official numbers for M1, M2 or M3. For this article, estimates are made using European Economic and Monetary Union (EMU) aggregates for the United Kingdom. These standards are based on those employed by the European Union, of which the UK is a member.

Some countries, such as the United States, do not officially publish M0. So where available, figures for outstanding currency in circulation were used. The US Federal Reserve also ceased publishing M3 data on May 23, 2006. However, various independent sources have continued to publish M3 figures for the US, and one such source is used for US broad money supply.

The money supply levels for each country were converted into US Dollars on July 11, 2008 at the displayed exchange rates for ease of comparison. The last column shows the date at which the money supply data is taken from.

Of this amount, the United States, Eurozone and Japan account for $33.1 trillion or 64.4% of the total. The following graph shows a cross-country comparison for M3. 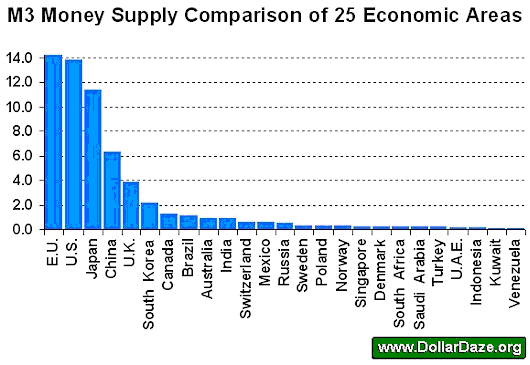 Please note that I've been unable to locate official M3 money supply values for China, Indonesia, Norway, and Russia. For these countries, M2 figures were substituted for M3 in the above figure. As a result, these four countries are underestimated.

Of the selected economic areas the annual increase of M3 ranges from under 1.0% year over year for Japan to nearly 40% for the United Arab Emirates. And it's clear that higher growth rates for money supply do not translate to overall prosperity in the long run.

If it did, humanity would have eliminated poverty long ago. Instead, what occurs is an inflationary boom followed by a recession. A hyperinflationary period may occur should confidence in the currency vanish.

The overall weighted annual M3 money supply growth for all areas covered here is 12.4%. (Where M3 figures are not available, M2 figures are substituted.) 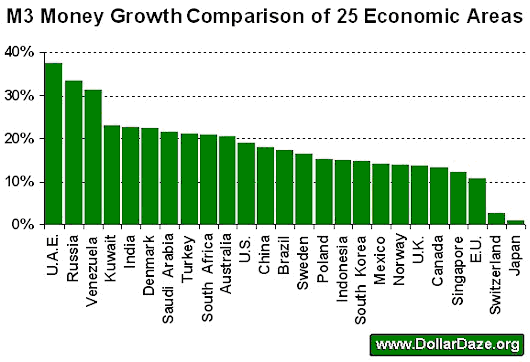 The total for M0 (currency in circulation) for the above 25 economic areas amounts to US$3.92 trillion. Using the same calculation as for determining overall M3 money supply growth we find that overall M0 and/or total amount of currency is increasing by 6.6% per annum. 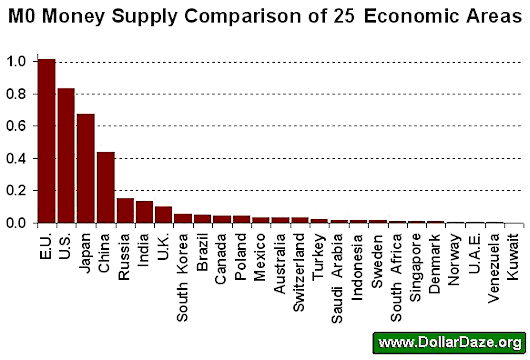 The value for the top three currencies in circulation – the USD, Euro and Yen – comprise 66.2% of the total value of all currencies discussed here.

According to the World Gold Council, at the end of 2006 the central banks of the 38 countries within these 25 economic areas held 24,170 tonnes of gold.

The following chart shows a ratio between the value of the official central bank gold reserves to the value of circulating currency.

Note that Norway and United Arab Emirates have no official gold reserves. The 563.1 metric tonnes from the European Central Bank was added to the Euro-Zone, bringing the total for this economic area up to 10,975.3 metric tonnes as of June 2008. 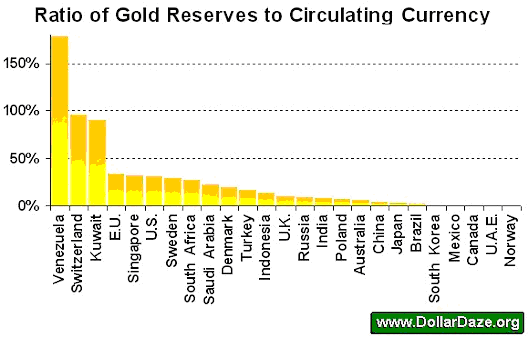 At the time of writing this article, the official gold reserves of Venezuela appears to out-value all of its outstanding currency by 78%. Both Switzerland and Kuwait have gold reserves nearly equal to the value of the currency issued.

Although not included in the analysis, Lebanon has official gold reserves of 286.8 metric tonnes valued at $8.89 billion at time of writing this article. The official statistic for Lebanese currency in circulation is only $2.4 billion. The most recent annual year-over-year growth rate for the Lebanese Pound is 8.3%.