END_OF_DOCUMENT_TOKEN_TO_BE_REPLACED

Gold mining output from China, the new world No.1, is already falling. It may end completely by 2014...

ISN'T IT ALWAYS the way? The latest rush into Buying Gold for investment has hit just as the world's gold mining supply is struggling to keep up with demand. 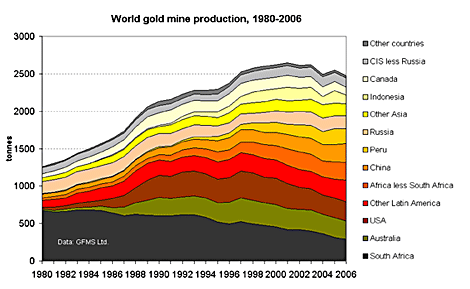 As this chart from the World Gold Council shows, global gold mining production has actually declined since 2000, despite the huge run-up in Gold prices.

Now China leads the world in gold mining output, having upped its production in 2007 by 12% over 2006, producing 9.7 million ounces or 276 metric tons, according to GFMS.

But gold production in China is actually down from the 2005 figures; it's just that South Africa, the old No.1 producer, has seen its production fall even faster.

The surge and fallback in gold production is governed by a steady stream of mine closings and expansions. Work sites get mined out before new ones can make up the difference. 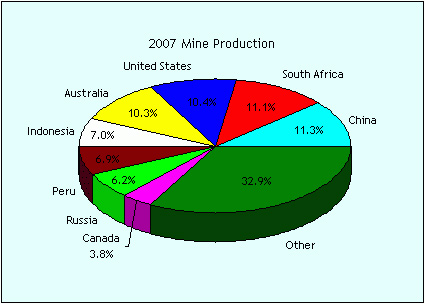 This often happens when Gold Prices are too low to warrant a lot of new exploration, which probably contributed to the slowdown in exploration spending in the late-1990s. That slowdown may now be playing out today in lower production rates, given the long lead time for new mines to come on market.

But won't the current high Gold Bullion prices boost the levels of supply coming out of the mines? Not necessarily...at least not in the short term.

The run-up in Gold Prices last year – up from $600 to above $900 per ounce – did improve the economics of mining. With prices high, gold mining companies have enough room in the budget to buy hi-tech exploration equipment and/or take risks on developing new fields. But the impact on production is not always immediate.

"There are two possible ways to approach [gold mining] projects, either to maximize profits at the present time, when the price is high, by electing to mine high grade ore, or electing to mine lower grade (metal) which is economical now," says GFMS's senior analyst William Tankard.

In other words, you can mine the expensive, hard-to-get-at gold while Gold Market prices are high and save the cheap/easy stuff for later. That can create an unusual effect, as focusing on the expensive, lower-grade ore today leads to lower production in the short term.

The advantage for mining operations, Tankard says, is that by going after the hard stuff first, you could "see the potential life of the mine extended by electing to mine sub-economic grade for sale at lower prices. By electing to do that now while it is economical, you save the best for last, extending the life of the asset."

So what is the outlook for global gold-mining supplies, particularly in China, now the global leader in production?

Not so good in the short run, says the Zijin Mining Group. It currently owns the largest gold mine in China, and it quotes GFMS in asserting that China's existing mines will run out of ore in six years.

Without new discoveries, China will simply deplete all its deposits by 2014 says Ren Guangzhi, Zijin's manager of investment.

The analysts at Metals Economics Group in New York, however, give China a little longer – some 14 years of gold production if continued at 2005 levels, and assuming a 10% recovery loss.

Of course, if Gold Prices stay high, new exploration will eventually lead to greater supplies. But it's not immediately clear when or if we'll start to see this impact.

A chief reason why gold production fell off in South Africa is the considerable danger involved in the mining process. Rock falls and poisonous gas explosions, for example, forced the Johannesburg government to close some mines and pause mining on some sites until safety could be improved in 2007. Already in 2008, power shortages also closed down mines in South Africa.

There also are major environmental concerns. Gold relies on "open-pit" mines that require moving mountains of earth that can leave holes visible from space, according to Worldwatch. The group claims the ratio of earth to gold equates to "roughly three tons of waste per wedding ring."

The process for separating gold from ore usually involves crushing the ore and then treating it with a cyanide solution. This bonds itself to the gold and drains it from the rock. But the waste, called tailings, is left behind after the gold is extracted.

Depending on local environmental laws, the cyanide-tainted water may get released into public water supply, and it may contain further toxic heavy metals released during the mining process, such as arsenic and mercury. The waste water may also raise acid levels in water and air.

According to watchdog groups including Co-op America Foundation Inc., gold-mining companies differ in that some practice healthier gold mining techniques and show consideration for worker health and economic fairness to workers and communities.

If you're looking to invest in gold mining companies – and the ecological concerns worry you, either directly or through fear of a backlash – you can screen gold-mining companies by checking with the following organizations:

Gold Mining Output: 3 years (or more) of weakness to come

Gold Prices exceeding $900 an ounce are bringing more investors to the gold-mining plate. Alliances of companies with greater technological resources and talent (and with banks eager to cash in on the gold boom) are helping to expedite the search for new deposits and increase the speed and quality of production at existing fields.

Average quoted cash costs for mining in 2005 were $269 per ounce according to GFMS, with total cash costs (including depreciation, amortization, reclamation and mine closure costs) rising to $339 per ounce. Beyond that, an additional $40 or so in ancillary costs bring the total costs into the $380 per ounce range. So there certainly is upside for companies that get this right.

"The [gold] mines are still suffering, actually, from the period of time in the late 1990s when the Gold Price was so depressed. It takes upwards of 10 years for companies to find gold and then get it out of the ground and get it into the market. We're seven years past the bottom of the gold price, so certainly for the next three or four years we're going to see mine supply be relatively weak."

If that's the case, that could mark the boundaries of the current bull market in gold. As long as demand remains robust, constrained supply could keep prices strong.