END_OF_DOCUMENT_TOKEN_TO_BE_REPLACED

So much for the idea that US banks are "hammering the Gold Price..."

WE'RE BACK in Houston following the 35th New Orleans Investment Conference which mi compadre Brien Lundin puts together each October, upholding the tradition the late James Blanchard started back in 1974, writes Gene Arensberg in his Got Gold Report.

If you missed this year's event you missed a lot, but take heart. High-quality DVDs will likely be available soon at the conference web site.

My own particular favorite of this years confab was the thoughtful commentary by Charles Krauthammer, who reminded us that the so-called "public option" of proposed healthcare legislation is merely a "foot in the door for the government to take over." Krauthammer's talk was a must-see.

I began my own presentation by pointing out that it's difficult for humans to conceive of just how much a trillion Dollars is, and offered up this simple example to illustrate it.

Over in the Gold Futures market, meanwhile, the Commodities Futures Trading Commission (CFTC) just published its monthly Bank Participation in the Futures and Options Markets Report. Detailing US bank positioning as of October 6th, it was released a little late this month for some unknown (to me) reason. But as always, it shows the positioning of reporting banks in the US futures markets for commodities including Gold and silver.

And as of Tuesday last week, with gold then at $1041.96 an ounce, the two US banks with reportable futures positions (one bank less than the previous month) held a total of 10 contracts long gold and a total of 116,790 contracts short gold for a total net short position of 116,780 Comex 100-ounce contracts.

That was with a total open interest in the Gold Futures market of 484,307 contracts. And this was while all commercial traders as a group (all 55 of them) reported a net short position of 281,864 contracts the same day.

A net short position in Gold Futures benefits if the price of gold falls, but could theoretically represent offsetting transactions to hedge the risk of opposite positions in physical metal, or perhaps financial derivatives in other markets.

For comparison, as of July 7th – three months prior – three reporting US banks held a net short position of 116,457 gold contracts, while all commercial traders as a group reported 191,307 gold contracts net short. The Gold Price was then at $924.65 an ounce, and total open interest in Comex Gold Futures stood at 372,985 contracts.

The US banks' nominal net short position is shown in the graph below, as sourced from the CFTC data. 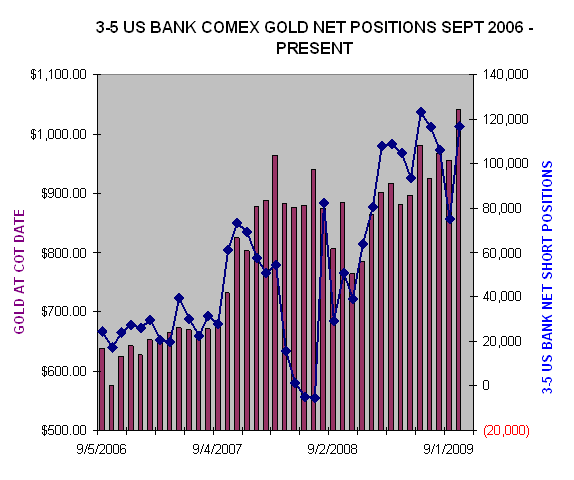 Over the last 3 months, as gold metal increased by $117 per ounce – some 12.7% – the large, well-funded and presumably well-informed banks first reduced their net short positioning by a little over 41,000 contracts in August and September.

But over the last month, those same US reporting banks put all that net short positioning back on. So the net effect, on a nominal basis, is that as gold rose $117 over three months, the US bank net short position basically got back to where it was when gold was at $924.65 in July.

During the same July-October period, the total combined collective commercial net short positioning (from all traders classed as commercial, including refineries and large wholesalers) actually ROSE a huge 90,557 contracts – swelling by some 47% from 191,307 to a teeth gnashing 281,864 contracts net short.

This means that, measured as a percentage of all commercial net short positions, the US banks' net short positioning (now held by two, rather than three institutions) fell from almost 61% in July to about 41% inside three reporting months, even as gold marched higher, as shown by the last four data points in the chart below. 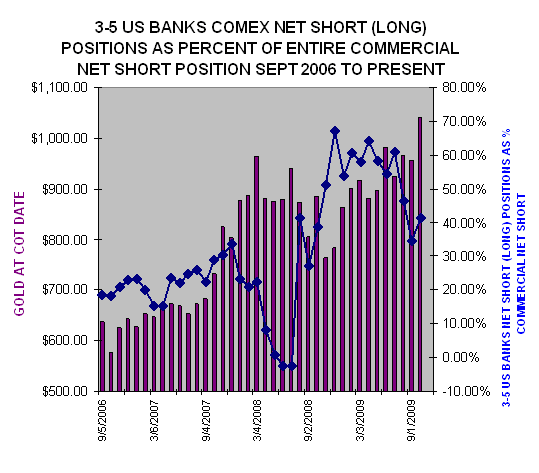 In Texas English, so much for the idea that the two US banks are "hammering the gold market" or anything of the kind. As a percentage of all commercial traders the two US banks have clearly become a considerably smaller portion of the net short game, according to the figures reported by the CFTC.

Looking at just the US banks' positioning in silver, on the other hand, two US banks reported holding 38 contracts long and 38,375 contracts short of silver for a total net short position of 38,337 Comex 5,000-ounce contracts as of October 6th. Total open interest stood at 131,801 contracts, and silver closed on the cash market then at $17.35 an ounce. 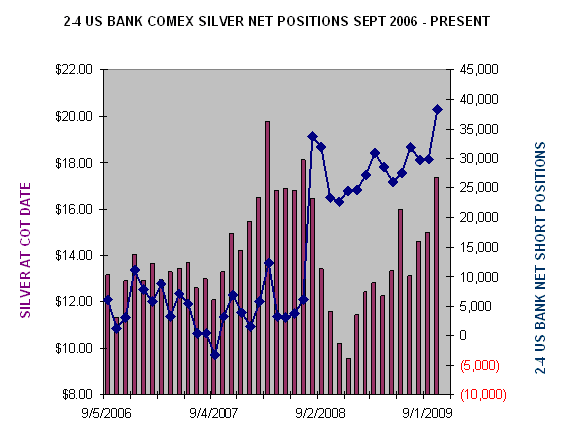 All commercial traders as a group (all 36 of them) held a net short silver futures position of 65,188 contracts as of October 6th. That was an increase of 17,132 contracts or 35.7% month to month. So the two US banks' percentage of the total commercial net short positioning actually fell slightly from 62.2% to 58.8% over the past month as shown in the graph below. 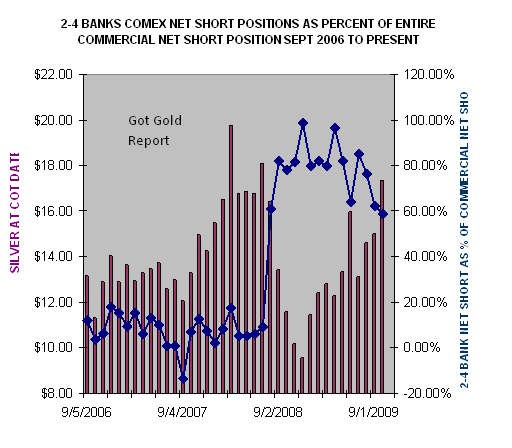 Simply stated, the two US banks roughly kept pace with all the other traders classed by the CFTC as commercial. But with just two large US banks holding over 29% of all the Comex silver contracts now open – and equal to some 59% of all the commercial net short position – the overall shape of the silver futures market remained very highly concentrated.

The CFTC is likely to announce new federal position limit proposals for public comment in the energy futures markets and possibly also the metals markets fairly soon. Here at Got Gold Report we continue to doubt that the CFTC will adopt hard position limits for actors on the financial hedging side of the metals markets battlefield, but we wouldn't mind being wrong about that.

When just two reporting entities are able to amass a net short position in silver of 38,000-plus contracts, over three times the 6,000-contract accountability limits (for two traders) imposed by the Comex division of the New York Mercantile Exchange (Nymex), that's one reason many feel that the market is structured to give the hedgers and short sellers an advantage much of the time.

Earlier this year, during several days of hearings on the subject of the CFTC taking over the job of setting position limits in the energy futures markets, we often heard the phrase "excessive speculation" from the CFTC commissioners. But not once did we ever hear anything that sounded like the commission was at all worried about excessive hedging or short selling.

We took the view then – and continue to believe – that this CFTC, under chairman Gary Gensler, is more concerned with trying to manage energy prices lower by limiting the position limits for players on the long side, while preserving the ability of large actors on the short side to ignore those same limits.

Bullion banks are able to take such large, over-limit positioning in aggregated accounts for their clients in silver futures via "exemptions for bona fide hedgers", even though they neither mine nor produce silver. Some of the bullion banks' positioning instead seeks to generate an income from an otherwise static asset (metal sitting in vaults) for themselves and their clients, by selling paper derivatives based on that metal located here and abroad. Since very little metal will actually ever be delivered to settle those derivatives, it's safe to say that much of that positioning is purely financial hedging.

Even though Chairman Gensler mentioned in his July 7 opening comments for the hearings that the commission intends to take another look at how exemptions to position limits are implemented, all of the restrictions and restrictive actions the commission has taken thus far affect only those traders who aggregated positions on the long side, such as reneging on exemptions to grain traders and threatening to do the same with aggregators of exchange traded fund investors in oil and natural gas.

Again, we'd love to be wrong on this one, but so far we've seen nothing that suggests that the CFTC intends to actually level the playing field when it comes to position limits in the metals markets. Not that it actually makes any difference in the long run.

No matter how concentrated the positioning on the Comex gets – and no matter how many contracts the banks decide to sell short – the metals markets are global and will inevitably seek their supply-demand equilibrium over time.

As a practical matter, position limits in one futures market might make a difference for very short periods of time (no pun intended), but over the long haul there's nothing that can stop the metals from seeking a liquidity-driven market price in the real world.