END_OF_DOCUMENT_TOKEN_TO_BE_REPLACED

GOLD PRICES slipped on Monday from the highest since August ahead of this week's key US inflation data and interest-rate decision from the Federal Reserve amid a fresh focus from analysts and pundits on the yield curve's 40-year extreme inversion, signalling economic recession for 2023, writes Atsuko Whitehouse at BullionVault.
Prices for silver, which finds nearly 60% of its annual demand from industrial uses, steadied above Friday's London close of $23.11 per ounce, the highest weekly finish since 28 April.
Having touched $1806 early Friday, the Dollar gold price last week set its highest weekly finish since the start of July at $1796.15 before edging down $10 per ounce today.
"The [Fed] meeting comes at a time when the market increasingly has become worried about the economic outlook heading into 2023," reckons derivatives platform Saxo Bank's commodity strategist Ole Hansen.
"[That] development has driven a gold and silver supportive drop in US 10-year yields back to 3.5%, while the yield curve inversion has reached another 40-year extreme." 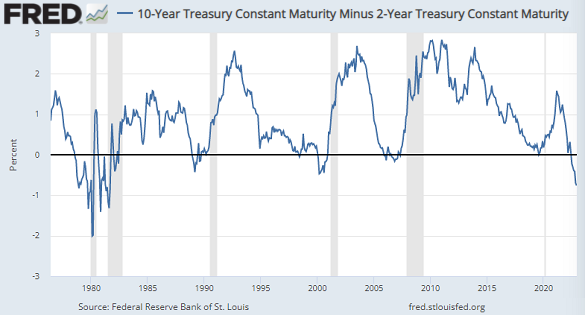 Tracking the gap in annual interest rates between long and shorter-term government bonds, the yield curve is typically positive, with 10-year US Treasury bond yields trading above 2-year yields.
But the opposite pattern, known as a yield curve inversion, has preceded every US economic downturn of the past 50 years, marked on this chart by vertical gray bars.
The 10-2 spread was positive as recently as July after inverting briefly in April before flipping to the most negative since 1981.
Today's yield curve inversion set a new 4-decade record on Monday, with the 2-year offering an annual yield of 4.33% while the 10-year's stood at 3.54%, bringing the difference between the two to 0.79 percentage points.
"The deepening yield curve inversion suggests investors believe the Fed is committed to inflation moderation even if it must sacrifice forward-looking growth or recession," reckons a strategist at Swiss bank Credit Suisse, referring to further hikes to short-term US interest rates as the cost of living runs at three times and more the pace set by the Fed's official inflation target of 2% per year.
Interest-rate traders are now pricing in a 75% chance of a 50-basis-point rate hike by the Fed this week, bringing the policy rate to a ceiling of 4.50%.
Further ahead, the largest single probability for the "terminal" federal funds rate – meaning the peak in this cycle – will be at 5.25% in May 2023, according to betting tracked by the CME's FedWatch tool, with the Fed then making its first rate cut in September.
"I believe by the end of next year you will see much lower inflation if there's not an unanticipated shock," said US Treasury Secretary Janet Yellen on Sunday.
"There's a risk of a recession. But it certainly isn't, in my view, something that is necessary to bring inflation down."
With Dollar gold prices reaching multi-month highs last week, latest data show that hedge funds and other leveraged speculators in Comex gold futures and options grew their bullish betting by 26% as a group in the week-ending Tuesday 6 December and cut their bearish betting 5%.
Overall, that pushed the net long position of Managed Money traders up 34% from the previous week having been net bearish as recently as mid-November, when gold prices were more than $100 per ounce lower than today.
Giant gold-backed ETF the SPDR Gold Trust (NYSEArca: GLD) has meantime seen positive inflows of investor cash so far in December, snapping 7 months of liquidation with growth of 0.3%.
Smaller gold ETF the iShares product (NYSEArca: IAU) has continued to shrink but at a slower pace of just 0.2% so far this month.