END_OF_DOCUMENT_TOKEN_TO_BE_REPLACED

GOLD PRICES traded just below $1270 per ounce Monday lunchtime in London, writes Steffen Grosshauser at BullionVault, extending last week's gain to push the metal 20% higher for 2016 to date as Eurozone stock markets slipped ahead of the European Central Bank's next decision on negative interest rates, due later this week.
The Dollar pushed higher towards $1.0940 per Euro on the FX market – three cents stronger than February's 4-month low – after news that German factory orders decreased for the second time in a row in January.
The Sentix survey of Eurozone investor sentiment gave its worst reading since the Swiss Franc de-pegging turmoil of January 2015.
The European Central Bank will announce its latest QE bond buying and negative interest-rate policy (NIRP) on Thursday.
Iron ore prices meantime leapt a record 19% on Monday after a senior member of China's politburo said at the weekend that government borrowing should be increased to boost spending and economic growth.
"Gold's rally has been impressive despite bearish factors including weak physical demand, creeping US bond yields, stronger equities and strong US employment data that lends support for tighter monetary policy," said investment and bullion bank HSBC in a report Friday, watching gold zoom within 35 cents of $1280 per ounce.
US bond prices slipped again Monday, pushing 10-year yields towards 1-month highs at 1.90%.
Energy commodities rose as iron jumped, with Brent crude oil gaining 1% to $39.10 per barrel, and now surging by more than a third from January's new 12-year lows.
Silver prices outpaced gold on Monday, extending last week's 5% gain to reach $15.67 per ounce –now up nearly 14% since mid-January.
Platinum's discount to gold remained at $280 however, while copper slipped 1% after rising sharply last week.
Strong investment money flows into exchange-traded trust funds backed by gold are "providing support to the market," said Australian bank ANZ on Monday, "boosted [by] the adoption of negative interest rates by some central banks, weaker US Dollar and persistent uncertainty in the financial markets."
Latest positioning data from the Comex gold futures and options market show "short positions continue to decline," ANZ goes on. "But at these high prices restrained physical demand may begin to temper the rally and we could be in for some profit taking or liquidation." 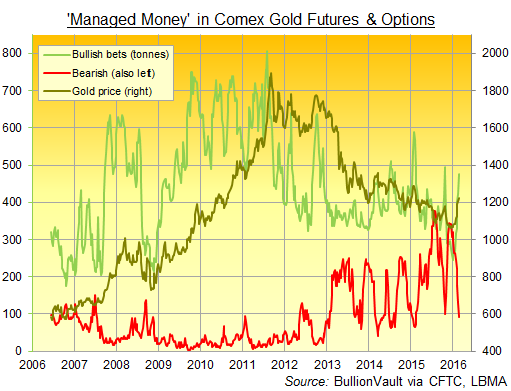 With gold having broken through what it calls resistance at $1250, "It will be interesting to see in the next set of data out this Friday whether this triggered renewed buying or additional profit taking," says Canada-based investment and bullion bank Scotiabank in its latest technical analysis.
"Our next target level for gold is $1308 (the January 2015 high), while the near-term support stands at $1246" on Scotia's charts.