END_OF_DOCUMENT_TOKEN_TO_BE_REPLACED

$828 per ounce on average after AISC costs...
GOLD MINING producers had their most profitable year ever in 2020, based on one metric, writes Frank Holmes at US Global Investors.
The average all-in sustaining cost (AISC) margin, which is the gold price minus the [total] cost to produce the metal [and keep producing in future too, hence 'sustainable'], hit a record $828 per ounce, according to Metals Focus.
What this means is that for every ounce of gold a mining company produced in 2020, it got to pocket $828 on average. This is comfortably higher than the previous record of $666 set in 2011.

The price of gold hit a record high of $2070 in August 2020, which helped increase revenues. But companies have also been focused on cost discipline.
We didn't see gold miners' exploration budgets increase significantly in 2020, due in part to the pandemic, which forced mine closures in China, South Africa, Peru, Mexico and elsewhere.
Exploration spending in the goldfield rose about 1.2% from 2019 levels, to end at $4.34 billion. This came even as total nonferrous exploration budgets slipped to $8.3 billion, down 11% from the previous year, according to CPM Group data.

The producer with the world's lowest cost per ounce in 2020 was Polyus, according to Kitco News. The Russian miner's AISC was only $604 per ounce. Among other companies in the top 10 were B2Gold ($788 per ounce), Centerra Gold ($799 per ounce), Kirkland Lake ($800 per ounce) and Polymetal ($874 per ounce).
Precious metal royalty and streaming companies also had a strong 2020. The world's largest by market cap, Franco-Nevada, reported phenomenal results: record revenue of $1 billion, record net income of $326 million and record cash flow of $840 million. In addition, the company declared a quarterly dividend of $0.30 per share, a 15% increase from the prior dividend of $0.26.
Wheaton Precious Metals also reported strong 2020 results, with net income up triple digits compared to 2019. Annual revenue of $1 billion and annual operating cash flow of $765 million were both records for the company.
Royal Gold, the third largest royalty company by market cap, reported record revenue of $158.4 million during the quarter ended December 31, 2020, a 28% increase over the same period a year earlier. The company reported incredible operating cash flow of nearly $100 million, also a 28% increase. Its annual dividend was raised to $1.20 per share, the 20th consecutive annual increase.
As many of you reading this know, we like royalty and streaming companies for a number of reasons. Compared to producers, their profit margins have historically been larger since they employ far fewer personnel than the miners and do not have high capital costs associated with developing and maintaining a mining project.
The chart below shows you just how efficient the royalty and streaming business model is. In 2019, Royal Gold generated an unbelievable $17 million in revenue per employee, which is many times more what some of the world's largest mining and tech firms generated on a per-employee basis. 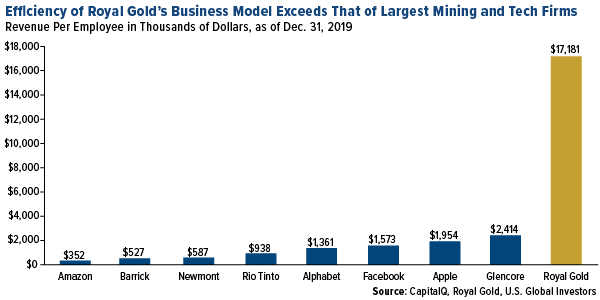