END_OF_DOCUMENT_TOKEN_TO_BE_REPLACED

Looking 30 years back to look forward...
THIS YEAR marked the 30th anniversary of the Denver Gold Forum (DGF), the world's most prestigious precious metal equities investment conference, writes Frank Holmes at US Global Investors.
The invitation-only event, held last week, was attended by an incredible seven-eighths of the world's publicly traded gold and silver companies by production, as well as leading metals and mining executives, money managers, analysts and investors.
We were one of the founding members of the DGF back in 1989, when I first bought a controlling interest in US Global Investors. During this year's forum, I was honored and moved to be recognized for our company's contribution to the group's creation and ongoing legacy.
US Global gold and precious metal expert Ralph Aldis and I had the opportunity to meet with a number of companies and analysts while at the DGF. We were surprised to learn that some people were still unaware that quantamental factors were being applied more and more to gold equities investing. Here at US Global, for example, we like to combine old-fashioned, bottom-up stock selection with cutting-edge quant strategies such as data mining and machine learning.
Indeed, much has changed in the precious metals and mining industry in the past 30 years, as we were all reminded by my long-time friend and mentor Pierre Lassonde.
Pierre is the legendary co-founder, along with Seymour Schulich, of Franco-Nevada, the first publicly-traded gold royalty company. What you may not know is that Pierre is also one of Canada's most gracious philanthropists and currently serves as the chairman of the Canada Council for the Arts Board of Directors.
According to Pierre, annual global gold demand has exploded in the years since the first DGF was held. Demand grew more than fivefold, from a value of $32 billion in 1989 to $177 billion in 2018.
Loyal readers know that today's central banks are net buyers of gold as they seek to diversify away from the US Dollar. But 30 years ago, they were net sellers. In 1989, central banks collectively unwound as much as 432 tonnes from their reserves. Compare that to last year, when they ended up buying some 651.5 tonnes, the largest such purchase since the Nixon administration, with Russia and China leading the way.

Speaking of China, Pierre pointed out to us that we've seen a significant shift in gold demand over the past 30 years, from west to east, as incomes in China and India – or "Chindia" – have risen. In 1989, Chindia's combined share of global demand for the precious metal was only about 10%. Fast forward to today, and it's 53%!
"Don't forget the Golden Rule," Pierre said. "He who has the gold makes the rules!"
One of the highlights of Pierre's presentation was his forecast for the price of gold in the next 30 years. After analyzing gold's historical compound annual growth rate (CAGR) over the past 50 years, ever since President Nixon formally took the US off the gold standard, Pierre says he sees an average price target of $12,500 an ounce by 2049. And under the "right" conditions, it could go as high as $25,000!

"I think gold is in a good place," Pierre told Kitco News' Daniela Cambone on the sidelines of the DGF.
"The financial demand is being driven by negative interest rates. Should the US Treasury 30-year bond yield ever, ever go negative, like in Germany and France, God bless, we're looking at $5,000 gold."
I'm sure Pierre will have more to add when he joins me on our upcoming gold opportunities webcast, to be held October 31. Save the date, and stay tuned for more details!
One of my own observations of how the DGF has changed over the last 30 years is the way in which mining companies pitch their stock to investors. Before, they would jump right into financials, production costs, mining feasibility and the like. Today, however, they begin by discussing topics such as sustainability and environmental impact.
You may have heard of ESG investing – which stands for environmental, social and governance. This set of criteria has grown in importance among "socially conscious" investors over the past decade, as you can see in the chart below.
In the US alone, assets under management (AUM) in ESG-oriented funds and ETFs have more than doubled from approximately $40 billion in 2013 to $90 billion in 2019, according to Morningstar data. In Europe, where institutional investors and money managers must now comply with certain ESG standards, the figure's likely even higher. 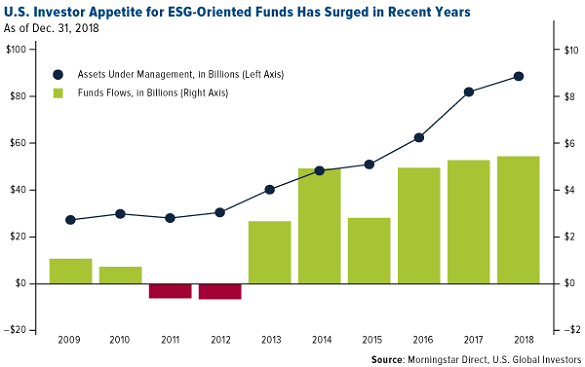 Please don't get the wrong idea. If these issues are important to investors, they should be free to allocate their money toward companies whose beliefs are aligned with their own.
My concern is that companies, money managers and institutional investors are increasingly pressured – especially by European governments – to comply with an ever-shifting set of standards, or else face divestment or, in extreme cases, being delisted from a stock exchange.
Take Norway's government pension fund. Valued at more than $1 trillion, it's the largest such fund in the world. It got this big largely thanks to the country's highly profitable North Sea oilfields. But based on a recent recommendation from the Norwegian parliament, the fund is actively dumping all of its fossil fuel stocks.
Then there's just the general confusion and inconsistency over what constitutes an ESG-compliant company, and who can invest if the company is deemed out of compliance. Every government in Europe, it seems, has its own definitions, disclosures and regulations. To operate in France, for instance, asset managers are now required to disclose how climate change considerations are incorporated in their investment decisions. The same is true for pension funds in the Netherlands.
All of these extra rules and procedures come at a high cost for everyone involved, from the companies themselves to asset managers. At the DGF, I heard that one mining company in particular had to pay as much as $40 million just to remain ESG-compliant. I worry too about directors and board members joining companies who care only about sustainability and have little regard for creating value for shareholders.
The good news is that gold and gold mining look very attractive from an ESG perspective. Gold's "green credentials" may in fact be understated, according to a recent report by the Royal Bank of Canada (RBC).
For one thing, owning physical gold – in coins, bars or jewelry – has absolutely no environmental impact and actually increases a portfolio's ESG rating. As for gold mining, the process gives off significantly less greenhouse gasses (GHG) on a per Dollar basis relative to some other mined products, including aluminum, steel, coal and zinc.
What this means is that gold has a much smaller "carbon footprint" than what some people might think.

Many mining companies are also working to meet some investors' changing attitudes.
IAMGOLD, for instance, is investing heavily in solar infrastructure, and its mine in Burkina Faso is the world's largest hybrid solar/thermal plant, according to RBC. Newmont Goldcorp is moving forward with its "Smart Mine Initiative," which uses optimizer software to maximize ore recovery and minimize waste. And Torex Gold has developed what it calls the "Muckahi Mining System," which alleges to limit surface disruption and reduce the use of fossil fuels underground.
In the same report, RBC says it remains "positive on gold," writing that the metal's "deep liquidity, near global acceptance and role as a 'perceived safe haven' and 'store of value' make it very difficult to displace" as an investment.