END_OF_DOCUMENT_TOKEN_TO_BE_REPLACED

A short history of the silver Thaler and the devalued, gold-less Dollar it's become...

SOME PEOPLE say that the US Dollar's days are numbered, writes private-wealth manager Nathan Lewis of New World Economics at the Huffington Post.

Maybe so. Let's look at the Dollar's long history, and see how we got to where we are today.

The "Dollar" originated in the city of Joachimsthal in Bavaria (now Germany). Beginning in 1518, silver from the mines near Joachimsthal was minted into silver "thalers", with a standardized weight of 29.2 grams. ("Thal" means "valley" in German.)

Eventually, governments throughout Europe adopted this standardized coin for commerce. The silver came from many locations, and many different governments produced the coins, but they were all basically identical. Europe was on a "Dollar standard"... 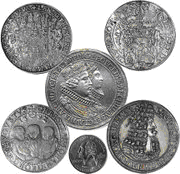 European "thaler" coins from the 16th-18th centuries are shown here, with a modern US quarter for comparison.

The Spanish silver Dollar emerged from the rich mines of the Spanish colonies of the New World, particularly Mexico. The Spanish Dollar became the most common coin in the American colonies, although silver dollars from throughout Europe also circulated.

In 1792, after the American Revolution, Congress adopted the European "thaler" or dollar as the standard in the new United States. They were following standard practice throughout Europe. The US Dollar was just a bit lighter than the original thaler, at 27.0 grams of silver.

In those days, gold and silver traded at a ratio that hardly varied over centuries. It was known as a "bimetallic" system. About 15 or 16 ounces of silver had the same value as an ounce of gold. Thus, the silver "thaler" system was also, in a sense, a gold system.

In time, gold became the central monetary basis rather than silver. Britain went to a "monometallic" (gold-only) system in 1816. The United States effectively put gold on top in 1834, although British-style monometallism was not wholly adopted until 1900. The Coinage Act of 1834 set the value of the US Dollar at $20.67/ounce of gold, or 1/20.67th of an ounce. This works out to 1.5048 grams of gold.

During this time, there were many experiments with floating, paper currencies. The US colonies had a wave of hyperinflation in the 1740s, and again in the 1780s. There was another round of currency devaluation during the Civil War. However, after the smoke cleared, they returned again and again to the stable gold Dollar.

The first permanent devaluation of the US Dollar took place during the Great Depression. In 1933, the Dollar's value was reduced to $35 per ounce, or 1/35th an ounce of gold (0.8887 grams). The introduction of floating currencies in 1971 was then something of an accident. It was an unplanned consequence of Richard Nixon's "easy money" policies of 1970. It was supposed to be temporary. As we can see now, however, it was one of the biggest changes to Western civilization in the past 500 years.

The Dollar soon lost about 90% of its value, and stabilized around $350 per ounce in the 1980s and 1990s. This period of crude stability has been called the "Great Moderation" by some economists. But this "Great Moderation" period has apparently ended. We are now in a new period of currency deterioration, whose final outcome remains to be seen. 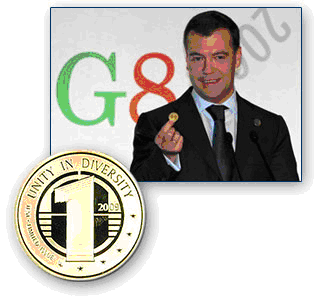 Capitalism, as we know it, was based on the foundation of the stable Dollar. I am sure that, in time, the floating-currency system in place since the Nixon days will be seen as an abomination. I argued in my book Gold: the Once and Future Money that a return to the original foundations of capitalism is a historical certainty. The only real question is the timing.

Russia, China and other forward-thinking nations are already preparing for the system that will replace the dollar. At a G8 meeting in July 2009, Russian President Dmitry Medvedev held up a half-ounce Gold Bullion coin and said it was an example of a "unified future world currency."

Americans, as usual, were completely oblivious. However, I guarantee the point was not lost on leaders elsewhere in the world.