END_OF_DOCUMENT_TOKEN_TO_BE_REPLACED

COPPER and gold miner stocks have been leading the Q4-Q1 rally in broad asset markets, writes Gary Tanashian in his Notes from the Rabbit Hole.

Back in October we began to plan the prospect of a relief rally that would be fueled by over-bearish sentiment (contrary bullish), 'Fed hawk' relief as we anticipated inflation signals to ease, and a post (mid-term) election seasonal pattern that is bullish for stocks.

For the purposes of this public article, we'll leave aside the mad science (macro indicators) that NFTRH subscribers were subjected to in support of the bull thesis along the way and also leave aside the individual equities and portfolio strategy shaped by the indicators. But the macro stuff is going to be ever more important going forward.

These indicators are, shall we say, absolutely fascinating in their guidance for the balance of 2023.

While I am bullish on gold and by extension very bullish on the gold miners, which will fundamentally leverage the 2023 macro, to this point the Q1 2023 rally is as expected and it literally includes the world.

With the US Dollar dropping on future Fed dove prospects, the world, which was impaired to varying degrees by the strong Dollar, is on the bull. It's a pervasive bull phase, and it's led by China. Or more to the point, it is led by "China reopening" hype.

Hence, it is not surprising that copper – often viewed as an intimate component of the China trades – is leading the gold miners. That will very likely not last, but it is what's in play at the moment.

First, a look at the Copper/Gold ratio, which was one of our major guides to a bearish 2022. Here is a post from May showing details. 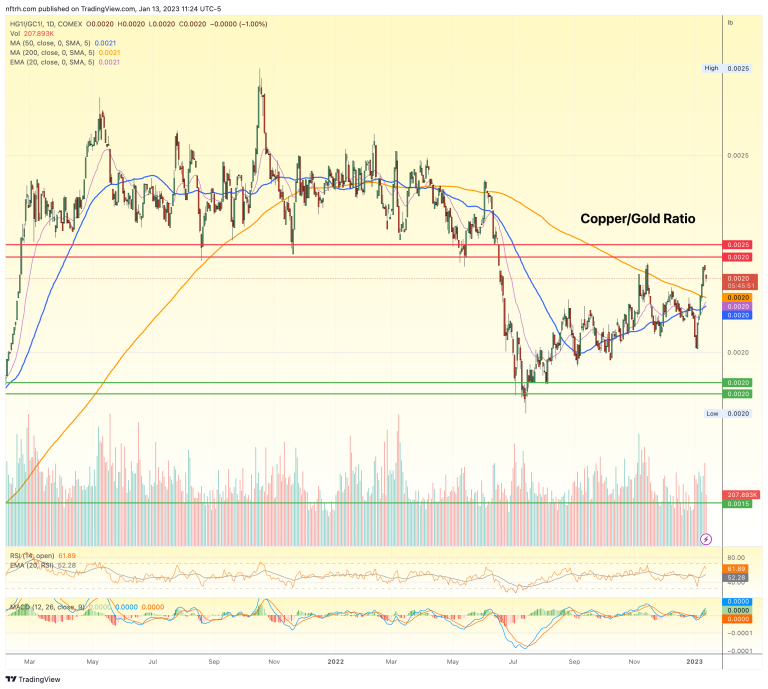 Moving on, the ratio of the copper miners ETF to the gold miners ETF (COPX/GDX) shows a daily chart uptrend, moderate though it is.

If you think that the chart above is going to break out, China is going to lead the world out of the bear's grip (I am by the way 100% long equities of strategic sectors/markets with ample cash and short-term bonds and zero short positions) and happy days are here again, then you also think that this uptrend will remain intact and probably accelerate.

If, as with my current view, you don't think that then you'll expect this ratio to break down.

2023 is going to be the year of the gold miners, in my opinion. Again, the fundamental reasons – some of which I've discussed in public articles you can search for – are beyond the scope of this article. But even with the gold miners, when the broad party flames out volatility will be likely. It's not going to be a straight line up to our operating target (for HUI).

Be that as it may, for the balance of this article let's concentrate on a real bull market that is engaging if the macro does as expected and fails (including China/Asia). It's not in copper and it's not in copper miners (or much of the rest of the macro, despite the current bullish view).

The gold miners have led broad US stocks for nearly 5 months (and counting).

The gold miners also lead the world (ex-US) over that same period.

With the fade in inflation signals, it's not surprising that the gold miners (which, contrary to so much misinformation out there, are NOT for inflation) are leading broad commodities since bottoming hard in November.

This is as it should be, fundamentally, when inflation is failing.

The gold miners are consolidating a bullish move vs. Chinese large cap stocks. This is logical, considering the ratio to copper miners above and the reason they are currently bullish.

While I am long Emerging Markets (and EM income funds) the gold miners are better. My gold mining positions dwarf my EM holdings.

But our plans are radically different for Q2, 2023 or possibly H2. Don't set your mind on autopilot and don't listen to the pervasive "new bull market!" bull noise you are going to hear. Well, listen to it and realize what it will be.

It will be the same frightened herds of 2022 thundering in the other direction. It's better to follow macro indicators, which led to today's bullishness and will lead to the next turn at another sentiment extreme.