END_OF_DOCUMENT_TOKEN_TO_BE_REPLACED

A short history of paper money – and the trouble it caused – in Ancient China...

ONE OF THE FOUR Great Inventions from the Ancient Chinese – alongside printing, the compass and gunpowder – paper was invented by Cai Lun in 105 A.D. using bark, rags, wheat stalks and other materials, writes Mike Hewitt of Dollar Daze.

The first historical experiments with paper money began shortly thereafter, recorded around 140 B.C., some 1,800 years before its arrival in Europe.

How this money came to an end is not known. The first well-documented use of paper money comes with the "flying cash" of the Tang Dynasty (618-907) used around 800 A.D. The term "flying cash" was used because of its tendency to Blow Away in the Wind unlike metal coins, known as cash. The government issued the paper in lieu of coins to remove the burden of moving large quantities of metal over vast distances. It was not a 'legal tender' but merchants did begin using them as a convenient method of exchange.

This practice expanded during the S'ung Dynasty (960-1279) to include paper certificates issued by up to sixteen note-issuing houses. Each note had pictures of houses, trees and people on it using a mix of red and black inks with a seal of the issuing-house and confidential marks to make counterfeiting difficult. Widely circulated, they were readily accepted for the payment in debt and other financial obligations.

In 1020 A.D., vast amounts were created to buy off potential invaders from the north leading to their rapid depreciation. In 1023 these notes were withdrawn, and only official notes printed by the government were allowed. The money issued by this bank was dated and had printed on it a notice stating it was valid for three years. Expiring notes could be exchanged for new ones at a 3% charge.

Problems of over-issuance lead to high prices during the Chin Dynasty (1115-1234). Various schemes were adopted based on the government monopoly on tea and salt, but all failed from lack of commitment and increasing costs of war with the Mongols. In 1160, Emperor Kao Tsung reformed the Chinese paper currency as earlier issues had been excessive and became nearly worthless. A new issue was produced, but hyperinflation resumed by 1166.

In 1217, the Mongols successfully invaded from the north. The Mongol empire issued paper money on a moderate scale in 1236, known as the First Mongol Issue. By 1260, the Mongol note circulation reached a substantial level.

The Yuan Dynasty (1264-1368) forbade the use of Gold and silver as currency. It also demanded that a certain percentage of taxes be paid using paper money. Excessive printing year after year soon flooded the market with depreciated paper currency until the face value of each certificate bore little or no relation to its counterpart in silver.

In 1272 a series of new issues were put in circulation at a conversion rate of five old notes to one new one. This became known as the Second Mongol Issue. When Marco Polo visited China (between 1275 and 1292), he was so impressed by paper money that he wrote a whole chapter in his Travels, describing everything about its manufacture and circulation.

Marco Polo described the manner in which China's paper money was issued...

"All these pieces of paper are issued with as much solemnity and authority as if they were of pure gold or silver; and on every piece a variety of officials, whose duty it is, have to write their names, and to put their seals. And when all is duly prepared, the chief officer deputed by the Khan smears the Seal entrusted to him with vermilion, and impresses it on the paper, so that the form of the Seal remains printed upon it in red.

"The Money is then authentic. Anyone forging it would be punished with death."

He also wrote that the emperor of China made so many notes each year that he could buy the whole treasure of the world "though it costs him nothing". When Marco Polo returned to Europe in 1296 people met his comments regarding Chinese paper money with disbelief and scorn.

While Marco Polo reported relative success for the Chinese monetary system, continued depreciation required another revaluation in 1309. The Third Mongol Issue followed the same 5:1 ratio of its predecessors. In an effort to reduce the amount of notes in circulation the government often refused to exchange new issues for old certificates that had been worn out through use.

Around 1350, during the final phase of the Mongol Dynasty, huge efforts were made to correct the currency. Paper notes issued by private, provincial and central government agencies had resulted in an explosion in credit and subsequent precipitous fall in its value.

In 1374, the new Ming Dynasty issued it first paper money, known as Ta Ming T'ung Hsisng Pao Ch'ao ("Great Ming Precious Notes"). These notes were inconvertible to coin and little effort was made to maintain its value. 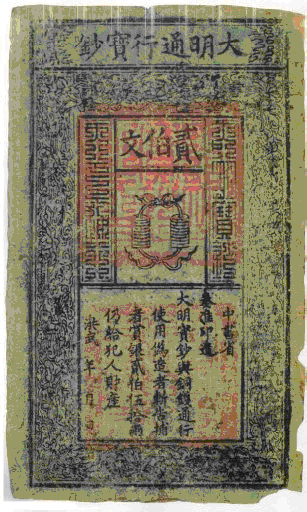 Six different issues are known to have occurred between 1368-1426 although it is likely that there were many more. The note shown here is a Ming Dynasty 200 cash note. The pictorial presentation is of two strings of ten 10 cash coins. The lower panel text reads:

"The Board of Revenue, having petitioned and received the imperial sanction, prints the Great Ming Precious Note, to be current and to be used as standard copper cash. The counterfeiter shall be decapitated. The informant shall be rewarded with 250 taels of silver, and in addition shall be given the entire property of the criminal."

The value of these notes rapidly declined and by the early 15th century, the ratio between the paper and coin exceeded 300:1. The Great Ming Precious Notes eventually disappeared from commerce and there are no known references to paper money being in circulation after 1455 thus ending China's first 650 years of experience with paper money.

For the next 500 years China functioned under a silver economy that ended following Chiang Kai-shek's rise to power in 1927 and the formation of a central bank, now the People's Bank of China.