END_OF_DOCUMENT_TOKEN_TO_BE_REPLACED

The US is not a wealthy nation because debt is not wealth...

HOW MUCH does the United States owe – and who does it owe?

"The budget should be balanced; the treasury should be refilled; public debt should be reduced; and the arrogance of public officials should be controlled."
Cicero, 106-43 B.C.

THE US NATIONAL DEBT, also known as public debt, is money owed by the federal government. As the government represents the people, government debt can be seen as an indirect debt of the taxpayers. The US government incurs debt by issuing Treasuries (bills, notes and bonds).

These securities are either sold on the open market or directly to the Federal Reserve. The US national debt, as of July 17, 2007 stood at $8.887 trillion. In addition to the national debt, the State and Local debt at the end of 2006 stood at just over $2 trillion.

Some analysts, such as those at Heritage.org, consider that all government liabilities, including those that the government has contracted for but not yet paid, should also be included in the national debt. Corporations must report such liabilities in their annual financial statements under GAAP (Generally Accepted Accounting Principles).

These "off-balance sheet" items include future payments for federal pensions, Medicare and Social Security. Inclusion of these obligations would dramatically increase the US national debt to $59.1 trillion or 403% of GDP! On a per capita basis this amounts to $516,348 for every US household! By means of comparison, the average American household owes $112,043 for mortgages, car loans, credit cards and all other debt combined. 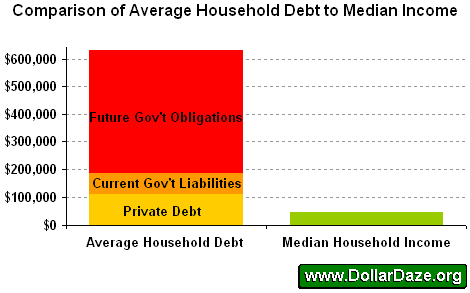 So to whom do we owe the national debt? The Department of the Treasury publishes The Debt to the Penny and Who Holds It. This up-to-date information divides the debt into two sections – Public and Intergovernmental Holdings. The former grouping includes domestic and foreign owned portions of the debt. The US Treasury publishes Ownership of Federal Securities which is another break-down of the composition. Through combining these two data sets, as of December 2006, the composition of the US National debt was: 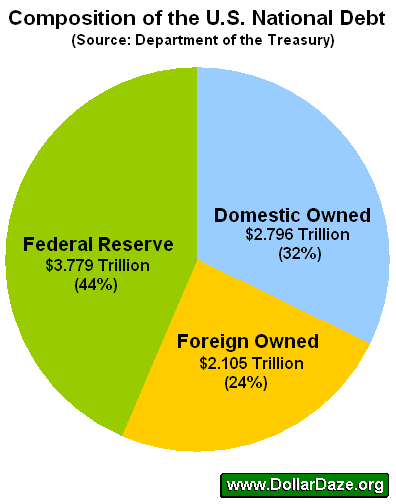 The breakdown of the domestic owned portion of the national debt is as follows: 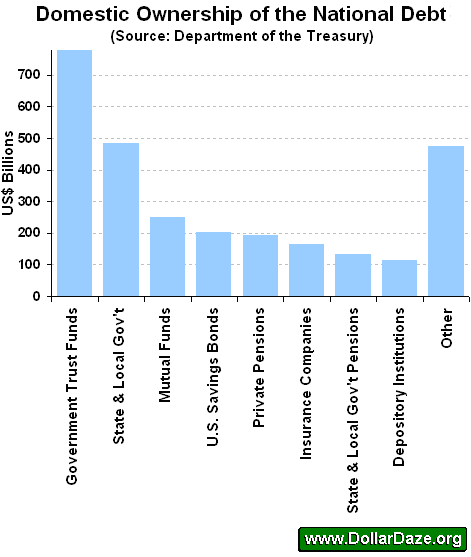 The US Treasury publishes a listing of the Major Foreign Holders of the national debt. 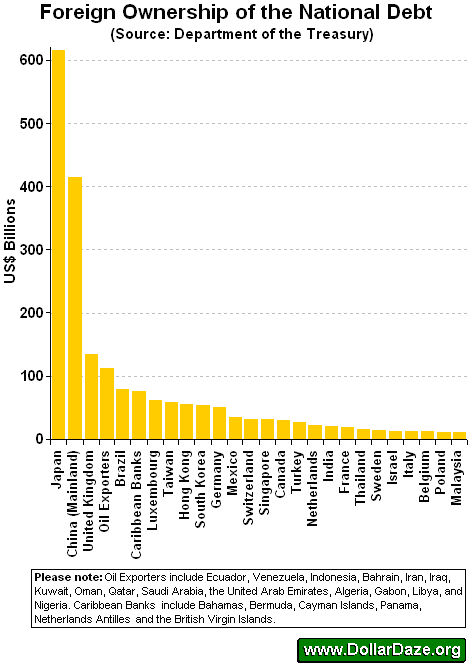 Of the US debt owned by foreigners, central banks own 64% with private investors owning nearly all the rest (Analytical Perspectives: Budget of the United States Government, Fiscal Year 2006 p. 257). As of the end of 2006, US Treasuries made up 33% of Mainland China's official foreign exchange reserves and 68% of Japan's!

The magnitude of the foreign-owned portion of the national debt is nearly three times the total amount of currency in circulation! Official numbers released by the Federal Reserve for June 2007 show the volume of currency at $755 billion.

Then there's the US Federal Reserve...

To begin with, the twelve regional Federal Reserve Banks are private institutions operating collectively in a quasi-governmental capacity. When the government spends more than it receives in tax revenue, it experiences a budget deficit. To make up this shortfall, it issues new debt. This takes the form of Treasuries that are sold on the open market. When there is not sufficient interest in the open market to buy up the required number of Treasury bonds, the government will turn to the Federal Reserve, otherwise known as the "lender of the last resort".

When the government "borrows" from the Federal Reserve, both the Treasuries and the money are literally created out of thin air. These newly acquired government securities increase the assets of the Federal Reserve Bank. This enables it to lend out many times that amount through the fractional reserve banking system. The process, known as "monetizing the debt", is inflationary.

This credit expansion as a direct result of the US government borrowing from the Federal Reserve dilutes the value of all outstanding currency. When the value of the Dollar goes down, prices go up. In effect, it is theft from everyone who holds US currency because they can now buy less with it today than they could have before.

The US Total Debt

The Federal Reserve's publications, Flow of Funds Accounts of the United States (also known as the Z.1 Releases) contain a great amount of data regarding money flows between various sectors. Missing from this data set is the portion of debt owed by the federal government to the Federal Reserve. To retrieve that data, one must subtract the Gross Federal Debt held by the Public from Gross National Debt published by the St. Louis Federal Reserve. This data should be added to the Federal Government Debt figures in table D.3 of the Z.1 Release to account for the complete national debt.

The following chart shows accumulated debt from the national, household and corporate sectors from 1956 to 2006. 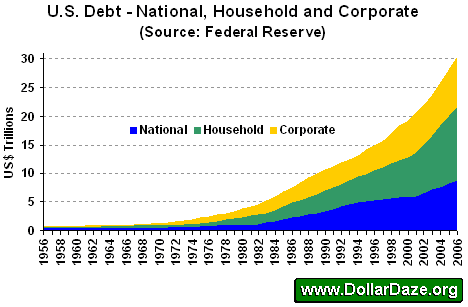 The household sector has surged nearly 50% since 2001, increasing from $7.66 trillion to 12.82 trillion in 2006. Most of this jump is attributed to mortgage debt that has risen 83% since 2001. This has been what market analysts have been referring to as the "Housing Bubble". Starting in 2001, ordinary citizens became attracted to an increasingly speculative real estate market. 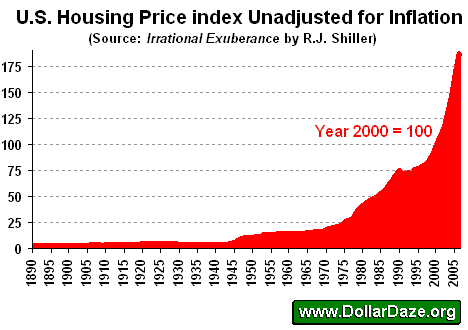 The combination of increasing money supply ("liquidity") and advent of 40-year low interest rates along with exotic loans (negative amortization, adjustable rate, buy-down, no credit check) encouraged heavy leveraging as house buyers attempted to purchase more expensive houses in hopes of reselling them in a few years at a much higher price to another buyer. 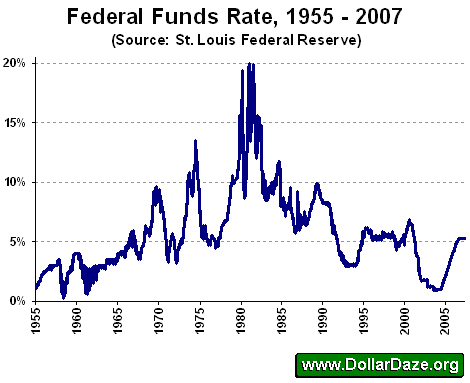 Marketing of these types of loans reached a crescendo in late-2004 and early-2005. The sub-prime industry offered buy-down mortgages whereby the buyer would pay a discounted interest rate for the first few years (otherwise known as a "teaser rate"). These low starter payments were marketed so that the buyer could "afford home furnishings and renovation projects". When it came time for these interest rates to readjust, many homeowners found that they were unable to cover their monthly mortgage payment.

As a result of this, the US is currently experiencing a financial meltdown in the sub-prime mortgage industry within the US.

To date, 99 firms have either gone bankrupt or have dramatically transformed their business. Over 1.4 million homes are currently in some stage of the foreclosure process. 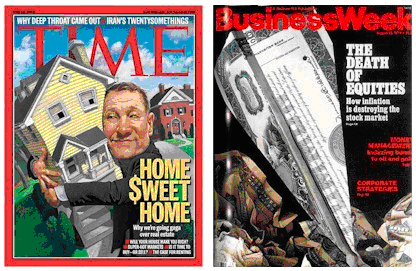 Time magazine's June 13, 2005 cover article of "Home $weet Home" was taken by some to be indicative of a speculative top and a portent for an upcoming market reversal. Just as Business Week's famous August 13, 1979 cover story called for the end of the stock markets at the moment when the largest bull run was just getting underway.

But "We Owe it to Ourselves", right?

Does the debt matter? After all, don't American simply owe it to themselves? Only if you acknowledge that "we" and "ourselves" are in fact very different entities. The Federal Reserve's Z.1 Release gives insight as to who exactly owes the money, and to whom. 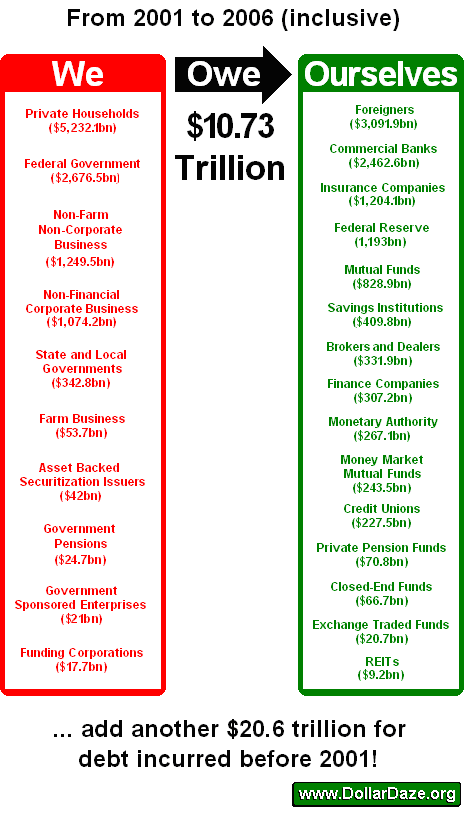 Clearly this is a one-way street. Households, government and non-financial businesses are becoming more and more indebted to foreigners, banking and financial institutions. Debt is not wealth. It is a claim on future production.