END_OF_DOCUMENT_TOKEN_TO_BE_REPLACED

Measuring the US money supply in Gold Bullion says gold is under-valued...

The OFFICIAL GOLD RESERVES of the United States steadily increased during the first half of the 20th century, writes Mike Hewitt at Dollar Daze.

Accumulation was particularly rapid following the Gold Reserve Act of 1934. It officially raised the price of gold from $20.67 to $35 per troy ounce, so large shipments of Gold Bullion went west across the Atlantic as the European central banks sold off their gold reserves for American currency.

This flow of gold reversed its course beginning in the late 1950s until the gold window was closed – and Dollars were no longer swapped for Gold Bullion – on August 15th 1971. From that date onward, aside from some sales in 1975 and 1978, the US official gold reserves have remained steady. 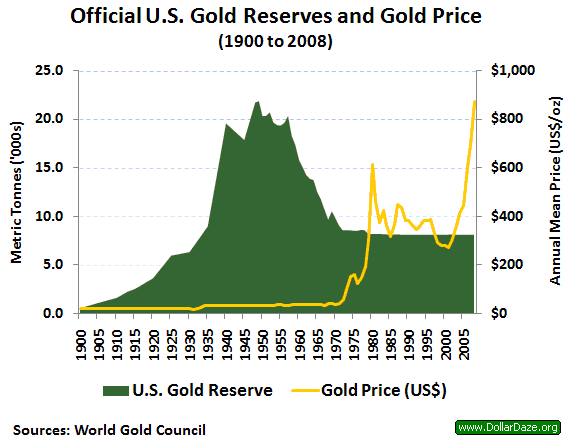 A recent report from Société Générale shows a chart comparing the value of the US gold reserves against the US monetary base from 1968 to 2008. The chart reveals a compelling argument that Gold Bullion is presently undervalued. Because as of December 2nd 2009, the US gold reserves of 8,133.5 metric tonnes were valued at $316.4 billion, against a monetary base of $2,081 billion.

The monetary base includes both cash in circulation and that held in bank reserves. The following chart shows data going back to 1918. 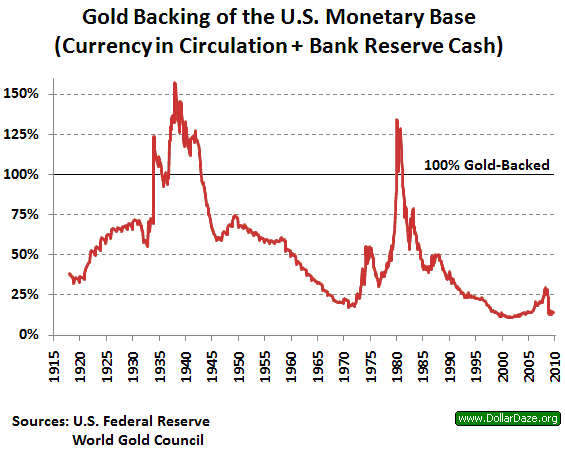 Two peak periods can be observed in the above chart when the value of the gold reserves exceeded that of the US monetary base. The first peak was a result of the gold hoard accumulated by the United States following the Gold Reserve Act of 1934. By the end of 1948, the US held 21.7 thousand tonnes – an astonishing 75% of all the gold held worldwide by central banks!

The second peak in the ratio of values in gold reserves to monetary base was caused from the price escalation of Gold Bullion during the late 1970s. On January 21st 1980 the peak price of gold hit a high of $850 per troy ounce – a record that would stand until January 2nd 2008, nearly 28 years later.

Gold has now been in a ten-year bull market beginning at a low of $251.70 per ounce in August of 1999 to over $1200 an ounce in December 2009. What is of great interest is that this near five-fold increase in the price of Gold has failed to significantly change the ratio of values between the US monetary base and the gold reserves.

The reason is that the US monetary base has exploded as part of the extraordinary monetary policies adopted by the Federal Reserve in response to the global financial crisis beginning on December 12th 2007 with the announcement of a temporary Term Auction facility (TAF). 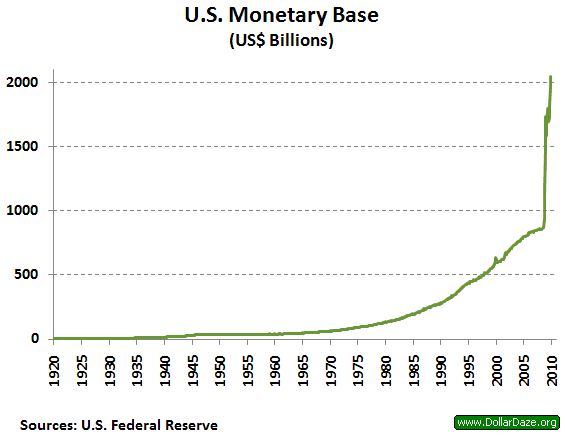 As of November 2009, the ratio of the US monetary base to the valuation of the gold reserves was nearly 7 to 1. The monetary base is now greater than that measured by M1 as the value of bank reserves has now exceeded that held by the public's checking accounts and other demand deposits.

This chart shows a comparison of the valuation of the US gold reserves against M1. 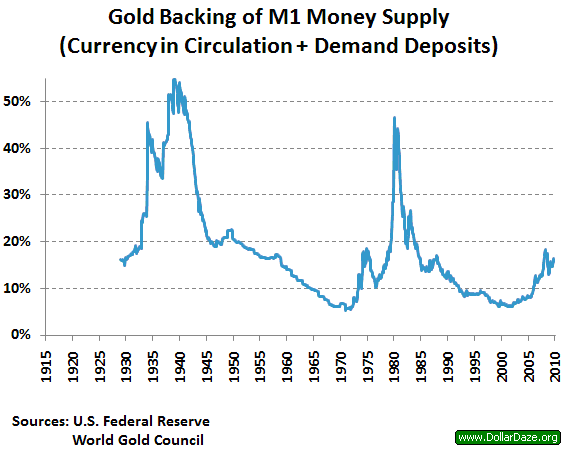 Historical data for both the pricing of Gold Bullion and the amount held as reserves can be found going back further than 1929, but unfortunately not for M1. Again, however, we see the two peaks as before. But at no time did the value of the gold held in reserves equal M1.

The current ratio of M1 to gold reserve is 5.7 to 1. It is interesting to consider that if everyone cashed in their checking accounts and went to Buy Gold directly from the US reserve at the current market rate, all of the gold would be gone after only 17.5% of the cash was redeemed. And if US citizens decided to also cash in their savings accounts, then that figure drops to 3.5%.

In other words, the ratio of cash in circulation plus the value of all publically held checking/savings accounts to the official US gold reserves is 28.5 to 1.

Though it would be unwise to simply project these ratios onto the current price of gold in order to determine what the price ought to be, they do suggest that gold is indeed undervalued. [Ed. Note: Société Générale puts the US money-supply equivalent price of gold nearer $6300 an ounce.] And at only two times in recent history was gold significantly over-valued in terms of the US Dollar. In both of these instances there was a clear result.

In 1934 the new price of $35 offered by the US monetary authorities resulted in a multi-year inflow of gold to the United States from the rest of the world. The second time was the final run-up at the end of the 1970s, culminating in the famous spike to $850 per troy ounce, swiftly followed with a near two-decade bear market.

The mild gold fever at present time does not compare to the long lineups of gold buyers seen in 1980. On the contrary, there is still a large level of public disinterest in accumulating gold in preference to US Dollars. As the 30-second Cash4Gold ad during Super Bowl XLIII revealed, the largest advertising campaigns are still aimed at getting people to sell their gold, not buy it.

How best to Buy Gold today? "If there's an easier way, I've yet to find it," says one BullionVault user...