How to use gold as an inflation hedge

In this guide for gold investing, we explore the causes of inflation and look at periods of high inflation and examine the tools and policies that were used to bring inflation under control. We will also examine the strategies and options open to investors as a hedge against inflation to help them protect their wealth as their currency devalues, plus the role that gold can play as an inflation hedge.

Inflation is defined as the devaluation of a particular currency over a period of time. Inflation is reported as the increase in value in percentage terms of a selected basket of goods and services in a particular country and currency. Often, different inflation rates will be reported to demonstrate the impact of certain elements within the measured basket of goods, for instance if there is a significant increase in fuel costs, fuel maybe omitted from a basket to show a lower underlying inflation rate.

Deflation is the opposite of inflation, when over a period of time prices are seen to fall as the purchasing power of the measured currency increases.

Inflation can be caused by supply side price increases (cost-push inflation) or by an increase in demand over supply (demand-pull inflation).

The 2022 surge in energy prices has been attributed to constriction in supply of gas after the imposition of sanctions on Russia following the invasion of Ukraine.

In the UK in April 2022 12-month house prices growth climbed to 12.4% demonstrating significant demand over supply for property.

Low levels of inflation are generally considered a good thing with governments and central banks often aiming for an inflation rate of between 1% and 3%. For example the Federal Open Market Committee (FOMC) judges a 2% inflation rate is optimal for maximum employment and price stability.

Worst periods of inflation in history

Hyperinflation is characterised by price increases of 50% or more per month. Often the worst cases of hyperinflation can be caused by particular issues drastically impacting a single country.

As recently as 2018 the IMF estimated that Venezuela's annual inflation rate hit over 900,000% p/a. The seeds of this hyperinflation were sown in the 1980s when world oil prices collapsed, and the economy shrunk. The continue over reliance on oil revenues, political instability and increasing poverty coupled with the devaluing Bolivar have drastically impacted Venezuela’s economy and development.

From 1992 to 1994 Yugoslavia experienced hyperinflation peaking with a daily inflation rate of 62% in January 1994 and averaged over 313,000,000% for the month. This level of inflation severely impacted key economic metrics with a 30% drop in GDP, unemployment reaching over 24% and tax revenues diminishing. The deteriorating economic situation contributed to the breakup of Yugoslavia and Balkan conflict.

Zimbabwe's hyperinflation started in February 2007 and peaked in November 2008 with over 79 billion % month-on-month inflation. Over 13 years later the annual inflation rate was still estimated to be over 737%. The image below of a 2008 ten billion dollar Zimbabwe note was not even the highest denomination note printed, there was in fact a one hundred trillion (100,000,000,000,000) dollar note. Needless to say with these levels of inflation those living in Zimbabwe tried to exchange their notes for other currencies or physical goods as quickly as possible. 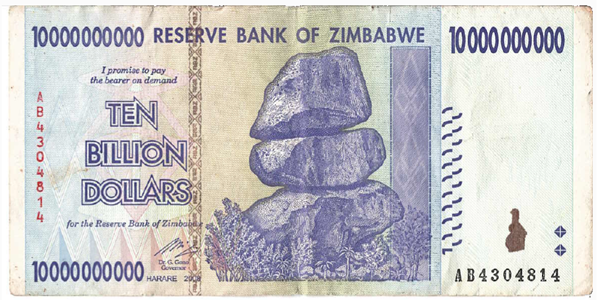 UK inflation in the 1970s was largely due to rising oil prices which trebled during the course of the decade leading to a significant cost of living increase which in turn led unions to call for ever higher pay increases exacerbating the situation with a wage-inflation spiral.

The UK recession of the 1980s with falling oil prices and rising unemployment caused the inflation rate to fall to an average of 5.2% between 1982 and 1989.

What brings periods of high inflation to an end?

To try to curb demand pull inflation by reducing peoples spending governments and central banks can increase interest rates. Whilst this strategy is likely to reduce inflation it won't have an immeadiate impact.

The objective for all governments is to bring inflation under control without stalling economic growth, significantly increasing unemployment or sending the economy into recession.

The following assets are widely considered to protect against inflation:

The following table of real returns compares how some of these UK assets have performed over the past six decades versus inflation.

It shows that gold can act as a strong inflation hedge, helping to offset the devaluation in real terms of your income, savings and other investment assets caused by the rise in the cost of living.

However, in the UK gold has also failed to beat equities or even cash in the bank in other periods of strong inflation. Instead of acting to hedge inflation, gold in fact lost nearly four-fifths of its real value between 1980 and 1999. The UK stock market in contrast kept gaining despite the cost of living rising at what would have seemed a shocking average of 4% per year if it hadn't been for the peaks into double digits of the 1970s.

Total real returns % across each decade

In other words periods of strong gold prices have coincided with periods when cash in the bank has lost real purchasing power. 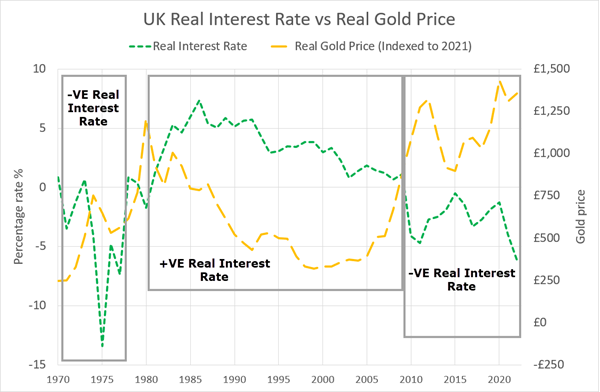 How gold provides an inflation hedge and helps protect investors?

When interest on cash held at a bank returns between 0.5% and 1.5% and inflation is running above 9% any cash you hold is losing purchasing power.

Between January 1970 and February 1980 as the UK battled rising inflation gold priced in Pounds Sterling went from £14.50 to over £300 per troy ounce and provided inflation protection for those that were able to diversify their investments by adding gold. 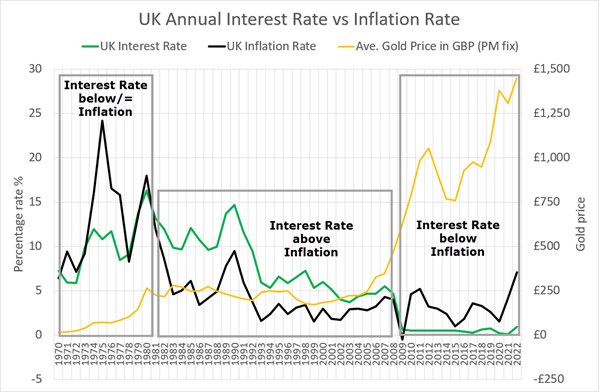 Gold protects investors against inflation because as their chosen currency devalues gold priced in that currency will tend to increase in price. The gold investor therefore sees the value of their gold holdings increase.

For UK investors gold has been the best performing investment of the 21st century so far as demonstrated in the annual asset performance comparison 1972-2021. This analysis compares yearly returns for UK and US investments such stocks and shares, commodities, real estate and cash versus inflation.

More than 1-in-3 worldwide respondents to the latest BullionVault 2022 summer survey (34.1%) say they have had to cut back on new investments in recent months thanks to the soaring cost of living.

Another 12.6% are having to dip into their existing savings or investments to make ends meet. This still means that more than half of the respondents (53.3%) are either able to continue saving and investing as normal or have only changed the mix of assets they buy, rather than the quantity.

Inflation is the main reason for investors choosing to hold gold, silver, platinum and palladium. 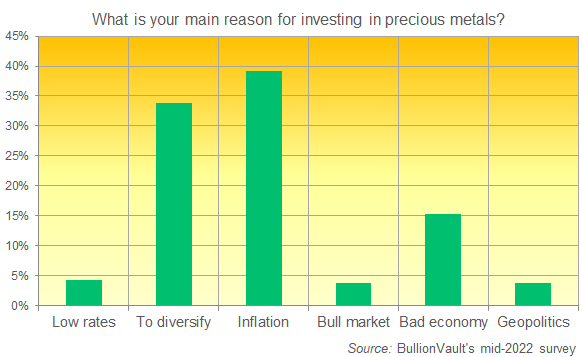 How BullionVault enables you to invest in gold in a cheaper, safer and easier way