END_OF_DOCUMENT_TOKEN_TO_BE_REPLACED

Investors turn to hard assets as cost of living jumps...

A GROWING number of prominent financial groups believes the era of low inflation is behind us, and that one investment strategy is to boost exposure to commodities and natural resources, writes Frank Holmes at US Global Investors.

Analysts at the world's largest fixed-income manager, with some $1.8 trillion in assets under management, believe investors may be able to prepare by buying inflation-adjusted bonds, raising cash levels and gaining additional exposure to commodities, many of which have surged in price on supply-demand imbalances.

Indeed, energy costs as well as prices for fossil fuels have skyrocketed in 2022 as international sanctions on Russia have destabilized supply chains. In several European markets, including the UK, France, Germany and Italy, power prices have repeatedly hit fresh record highs. Electricity prices in Germany have risen so much this year that they're the equivalent of $1000-per-barrel oil, according to Bloomberg. Coal has also hit a new all-time high.

I believe the proverb "If you can't beat them, join them" could apply here. If Pimco and the others are right, and energy costs and commodity prices will be elevated for longer, investors may want to consider adding to their exposure.

Besides gold and silver, we prefer metals and minerals that may benefit the most from a global transition to renewable energies and electric vehicles (EVs). These include but are not limited to lithium, copper, nickel, cobalt, zinc and others.

In the US and China, prices for lithium carbonate, a critical component in EV batteries, are at record or near-record prices right now, exacerbated by power cuts in China as a historically intense heatwave tests electricity grids. 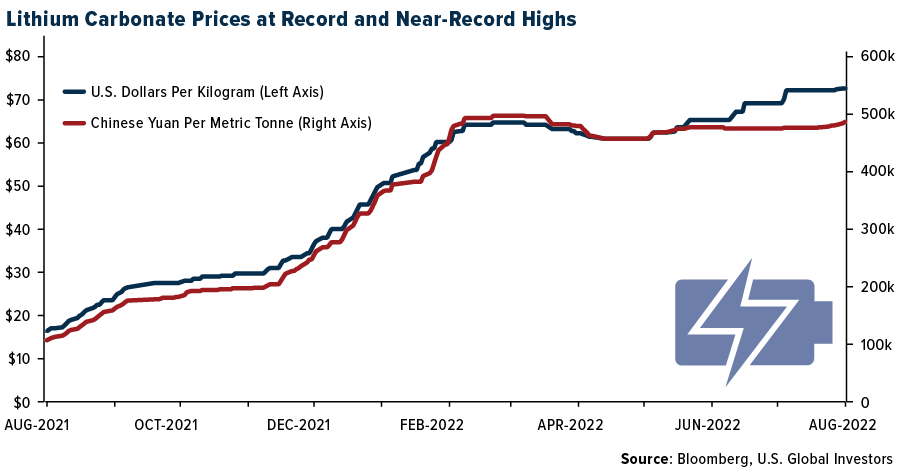 Even if power cuts were not an issue, we would still like lithium and lithium producers in the long run. Global EV sales are forecast to hit an annual 64 million units by 2040, up from 6.6 million in 2021, according to Bloomberg New Energy Finance.

We also like copper, sometimes called the "metal of electrification." Demand for the highly conductible red metal is projected to grow from 25 million metric tons today to about 50 million metric tons by 2035, according to S&P Global. Per-capita consumption growth could accelerate markedly between 2024 and 2035 as global investments are made to meet net-zero emissions goals.

This unprecedented growth will necessitate the development of new mining projects, as demand will not be met through substitution and recycling alone.