END_OF_DOCUMENT_TOKEN_TO_BE_REPLACED

NOBODY is talking about it, but the most important number in the world just hit a record low, writes Steve Sjuggerud in his Daily Wealth email.

The implications are incredible.

When this number hits a record low – as it did a few weeks ago – crazy things should happen.

It's not an understatement to say that MOST of the planet's financial decisions START with this number.

Most important, with this number at record lows, central banks will do stupid things, which should cause asset prices to soar.

The world's most important number is the price of money.

Nearly every major long-term financial decision in the world is based on this number.

Should a company build another factory in Asia now? How much house can your family afford?

You simply can't know the answer to either of these questions without knowing the price of money.

But what is the price of money? How do you measure it?

The simplest gauge of the price of money is the interest rate on long-term government bonds.

For decades, four countries have ruled the world of finance: the United States, Japan, the UK, and Germany.

So the planet's most important number when it comes to money – what we call the "SJUG Number" – is the average interest rate on the 10-year government bond in these four countries.

("S-J-U-G" stands for the States, Japan, the UK, and Germany. And yes, it's like my last name to make it easy to remember. Pronounce it like in "sugar".)

In February, the worldwide price of money – the SJUG Number – hit a record low. Take a look: 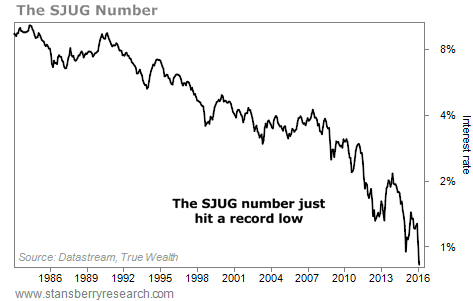 You'd think rates couldn't go any lower. But a lot has changed in the last eight years...The SJUG Number has gone from incredibly low to shockingly low (below 1%).

Said another way, if you are willing to lend world governments your money for the next 10 years, you will earn less than 1% a year on your money.

The implications here are important.

It will drive a mass exodus of investors OUT of bonds that earn 1%. Folks have to do something else with their money.

The mass exodus of investors will move OUT of bonds that earn 1% and into...well...just about anything else!

Risky assets around the world should boom...US stocks, emerging markets, you name it. With the SJUG Number near record lows, ALL of these could move dramatically higher.

Personally, I believe now is the time to move money into risky assets. The SJUG Number hit a record low in recent weeks. And that's going to have a profound impact on asset prices.